They say moving abroad changes you, it makes you a different person. I've already moved to a far away place, leaving my loved ones behind and now I am doing it again. You must think it should be easier for me to get along and not to . But I am experiencing that the feeling of leaving everything behind doesn't change. I miss the Netherlands. I miss my friends, I miss the structure, the food and even the rain.. I miss my uncle, my other family, the parties. Ohh man..
Don't get me wrong, I really like it here! I've already made loads of friends and the weather here is great! The sun is shining, it has been 70 + degrees Fahrenheit (I have no idea what that is in celsius but it's "not wearing a jacket" warm). But I am working full-time (40+ hours per week) and do not have a lot of time to hang out during the week. Traveling to my internship takes me about 1,5 hour one way, this makes the time I have left per day even less. But weekends are all about walking around in Chi-town and eating healthy vegetarian stuff and shopping and going out and meeting new people. American's are really friendly, although nothing tops Japan, but yeah they do beat the shit out of the Dutch when it comes to being friendly. "Have a good one" that's how we greet people here, meaning have a great day. The American city people are also not as fat as the Dutch promote. Nah, I haven't seen extreme overweight people in Chi-town. I've heard its more a southern America kind of thing, like going to Alabama is eating friend peanut butter and jelly sandwiches. What the hell...!

Now I am going to tell you a little bit about my research. I am trying to find out what protein causes heart growth when patients get a myocard infarction (or heart attack). This is really interesting, since the results of my research project can be an onset to a new medication. If they can find a blocker to this protein, patients heart can be protected against a heart attack and they won't have to live with the damage a heart attack can cause. So yeah, I am trying to make a change in the world ;). I am working with the mouse's heart to get results and to find the answer to my question. And for that I have to anesthetize them. Slowly I am improving my skills to do the surgery, although I still can't stand killing them.

But yeah moving abroad does change you. I went from hating mice to thinking they are way to cute to kill them, I went from being totally into hip hop to totally being into techno (hard style), I went from a meat loving person to a vegetarian. But 1 thing will probably never change, I still love shopping :) and for this America is perfect! And probably none of these changes are permanent ;) 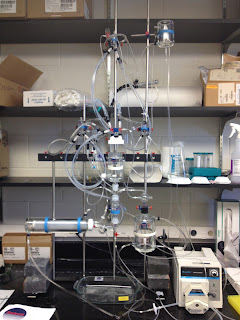 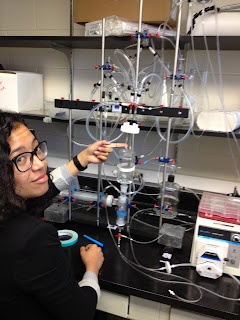 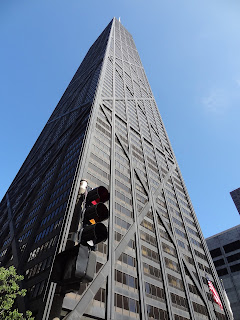 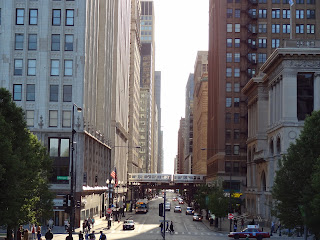 View from the chrome peanut 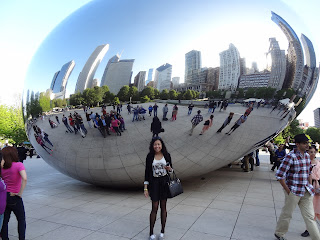 Do you see the city in the peanut? 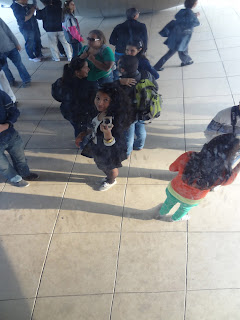 And of course in-despicable me
I live in Lakeview, with the subway 15 minutes up north from downtown. Lakeview is also known as the gay area of Chicago, meaning if a very attractive man stares at me it's because I look foreign or dress foreign, or have something hanging from my nose. But I love gay people, especially the men, they make me feel safe. I must say Chicago is a very liberal city, everybody does what he/she wants, no one cares; people bike, the sun is shining, there is a beach with fresh water, a FREE zoo with uncountable more animals than Artis (Amsterdam's zoo which cost 17,50 euros). The food in Chicago is excellent, the people are friendly, public transportation is good, there is so much positive about Chicago...
During summer Chicago has the most festivals in whole America and it's famous for it. I already have tickets to Lollapalooza and the line-up is very variated and very up to date. There is an awakening (without the s) a house-techno festival, 2 days of none stop partying, and a shocking amount of good Djs. I really hope I will find a techno fan to go with or else I'll go solo. 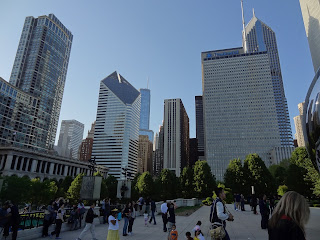 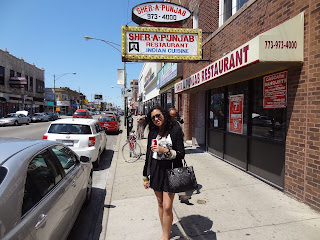 My internship is great! Except the mouse killing part I really love what I am doing. Yes I've became an animal killer. But I have to do surgery, take the heart out of the mouse's body, hang the heart in a glass/plastic system and try to keep it alive. All within 5 minutes. If the heart dies on me, another mouse dies on me.. Yep, you can label me animal killer. But the whole idea and the action of doing it made me vegetarian, but only for a short period. Right now at home I can still smell raw and still get nauseous thinking about the surgery. It's not the cutting that makes me sick, it's the - seeing the mouse panicking because he/she knows death is near - that makes me sick. I honestly think the mouse knows what is going to happen. Ugh! *rolleyesKady* But as regarding its contents I really like this research project. And my collegues are really nice! Especially the PhD students group. They are so funny!

I have a friend who, as he had always said to me, lives in a total paradise. I never believed him until I saw for myself.
He lives in Minokamo, a very small town in Gifu, somewhere between Kyoto and Tokyo, and northwest to Nagoya. Small people live in Gifu; people who think small and love the countryside. Minokamo itself is not a special place to be at. It’s more or less a village with rice fields and outlets where they sell Gucci, Prada and Hermes on sale.  Contradictory, but yes outlets with labels, which I haven’t been to, because my male friend didn’t want to bring me female shopping. (How Much I miss my gay friends!)
Day one in Gifu
The first day in Gifu we hiked starting at Magome-juku and walking 7 kilometres to Tsumago-juku
Both are small villages on a path people used to walk to go to Tokyo. The Japanese government decided to keep the pathway and both villages traditional and create a touristy place. The people in the area didn’t really live there, but travelled back and forth to open their stores and restaurants. The pathway was mostly following a river, which ended up in a big waterfall, but continued as a river to Tsumago-juku. It was really nice to walk over and passed, bricks, stones, old houses and the flower-trees.  There were also thee houses on the way, where you could stop for a cup of thee (give a tip of around 100 yen). Hearing the water floating, walking past the waterfalls, taking pictures of the small waterfalls, seeing the sakura (Japanese Cherry Blossums), going to the toilet and embracing the luxury of being able to enjoy nature in such a modern yet authentic atmosphere. I love Japan... Luckily the weather was excellent. No cars, motorcycles, I guess the country side of Japan, did make me feel like home and brought me back to my jungle roots. And made me realize I really am a jungle woman, but a city girl at the same time too.
I really enjoyed it.
Arriving at Tsumago-juku there were a lot of traditional shops, where you could buy traditional cutlery, plates, glasses all made from wood. 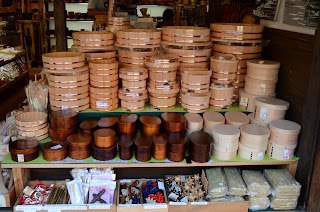 Everything was traditional. For diner we ate a traditional Japanese meal; consisting of homemade noodles and rice on a stick. The noodles you dip in cold soy sauce, which is mixed with some green onions and wasabi, and slurp them. I don’t slurp, but Japanese people do J
And the rice stick, is about the best traditional food item I ate in Japan. Man it was good. The stick was sticky rice dipped in a nut-sauce; made from hazelnuts and sesame, and then grilled. I could have eaten five more of those things and still love it.
I love food. I ate everything Japan sold me, and loved everything I ate.
What I found economically not stimulating for the villages is that the shops close around 17.00 when the last bus goes. I would walk back, if I had to if the place was still going on.
Day two in Gifu
We decided to go to a monkey park, where we could see monkeys walking freely and we could touch them. We ended up in a monkey park; with I think 10 monkeys, though I liked the blond monkeys. They were so cute! But the park was more a children’s playhouse than a monkey park. Seriously! I might sound to direct but I didn’t really like the place. I think Phil and I were the only two people without children walking around. We stayed in the park for about 2 -3 hours and took off. So, monkey park in Gifu is a MUST NOT DO!
After our failed attempt back to natures gift we went to a barbecue of his friends. Seriously everyone was drunk. Seeing Japanese people being drunk was a cultural shock to me. Even the women were drunk.
Asahi, is Japan’s most famous beer. And … is Japanese women most famous cocktail.
I drank a little bit of both. Too bad Phil had to drive so he couldn’t drink. I am still impressed how much Japanese people liked me. There was a group of people hanging around me. I don’t know if it was my hair or me being foreign which attracted them, but they were so nice. Ayumi, spook three words of English, yeah, good and beautiful. But still I understood everything she said to me.
I love Japan! I have no words to explain how much I loved being there and meeting the people.
Day three in Gifu
My last day in Gifu, Phil and I spent in Gujo, another traditional town in Japan. The big difference between Gujo and both Magome-juku  and Tsumago-juku Is that the people in Gujo still live traditional. The houses in Gujo are still inhibited, the shops are open everyday, people go to school in Gujo, pray and eat in Gujo.
The founder of fake food is originally from Gujo, where he first established a fake food fabric. In Japan about every restaurant presents there dishes with fake food in the shop window. Before fake food, restaurants used to present real food, which ofcourse doesn't stay good for a long time. So starting a fake food fabric was a quite a good discovery. 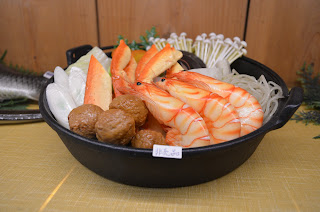 Gujo is really a beautiful town. Phil and I walked through the town, found a garden where you could sit and relax a bit, got lost and ended up at a waterfall and went to the famous Gujo Hachiman Castle, which is on a cliff and gives you an overview of the whole town. Gujo has a lot of temples and shrines, narrow streets for cars to drive in and no side walk. There was a watermill, which produced clean water you could drink. There were clean glasses you could use and a faucet you could tab water from. 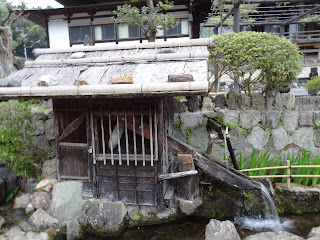 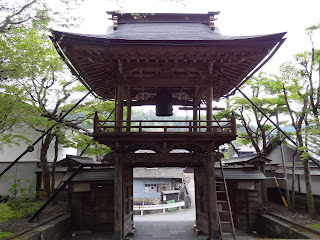 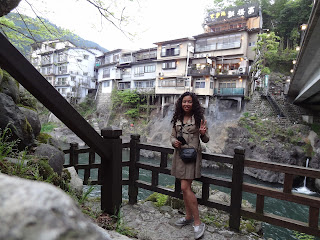 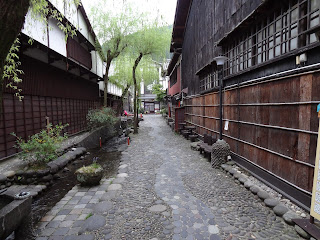 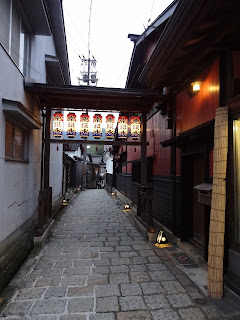 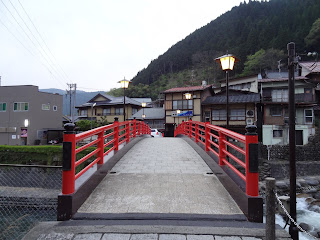 I tried to explain my time in Gifu as elaborateas possible. But actually there are words too little and too less to explain how I feel and think about Gifu. I loved the place, I loved walking around, I loved the quietness and soulfulness of the town. Maybe the weather made the atmosphere even better, but Gifu is just a place you would have to see for yourself. I know you would love it.

Try-outs and a little bit of advice