Dear friends,
Since I have a lot of foreign friends, I have decided to blog in English again.


Kyoto
Kyoto is the Amsterdam of Japan. It’s romance, its authentic atmosphere, the number of tourists walking around, the lack of skyscrapers. I love Kyoto. Arriving there made me feel like I’m home (the Amsterdam home). Luckily the weather was excellent during my stay in "the city full of Japanese treasures".
My first day; I went temple hunting near the Hostel. There were multiple small and non-famous temples and shrines in the neighbourhood, and a park where you can walk through. I walked for several hours, being impressed by the love of Japanese inhabitants for Buddhism.  Small temples everywhere, people saying prayers everywhere. To learn something about Buddhism I went to a mass. Too bad I didn’t understand a thing. 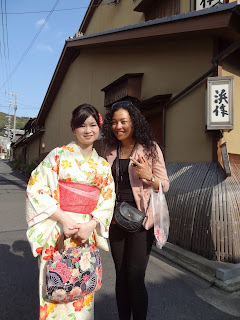 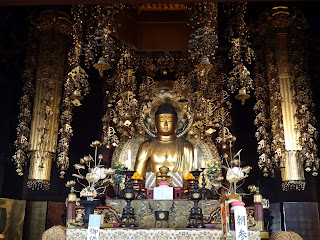 Later at night I wanted to visit another temple the Ryoanji temple, but when I arrived it was closed. Apparently a lot of touristic places close somewhere between 16.00 - 17.00. So instead of leaving right away, I walked around, sightseeing. There was a park, with a lot of bugs, a very nice wooden bridge and a lot of small souvenir shops. Here I bought my kimono, I wanted a short kimono so I could wear it as a sweater/blazer. Later at night I had diner at a very cheap restaurant very near the palace. The food was very good, but there was a drunken Japanese man sleeping in the restaurant. It was so funny to see, and they wanted him to leave, but the old man was too drunk to wake up. Even under these circumstances Japanese people stay polite. No one threw the man out or called the police, they took their time to wake him up and to carry him to the taxi. 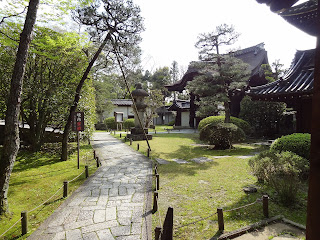 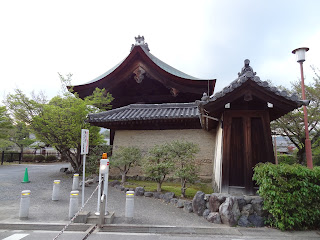 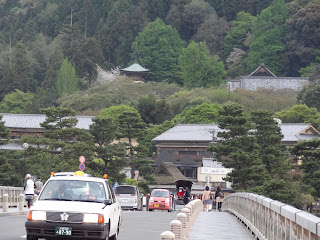 The next day I went to a shrine. At first I could not find it, because I had a really under detailed map. But I also had a plate of sushi with me, so a Japanese guy came to talk to me. I didn’t understand what he said, but it must have been something like “are you going to eat that now?” So I nodded, and the man took me somewhere where I could eat quietly. When I finished my sushi I asked him where the shrine was and he took me with him and showed me the entire area. We were busy walking for at least 4 hours. He took me to the top of the mountain where there was a nice view over Kyoto. It was so much fun! I didn’t understand anything the guy said, but still we could communicate. He did make me say a prayer at every shrine or statue. I said the same prayer every time. At the end of our journey I wanted to give the man money, but he didn’t want to take it. Japanese people are so kind… We said our goodbyes and he went back to a temple, and I to eat something. 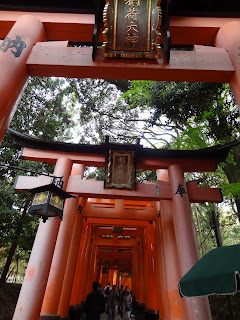 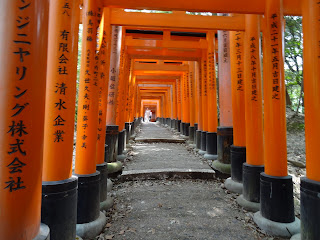 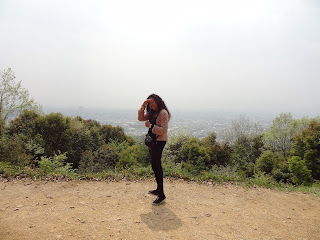 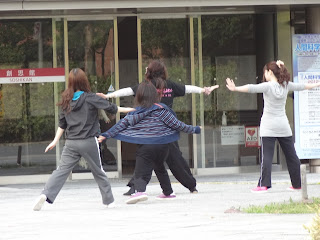 Kyoto seems to be a big student city. I think it's very good for Kyoto, since it is such an old city, having a lot of students keeps the city young.
Nara and Ikaruga
The next day I went to Nara. Arriving at Nara, the woman of the tourist information desk advised me to go to Ikaruga first to see the oldest Japanese wooden temple "Horyu-ji" and than return to Nara. Ikaruga was a very small village, with very view people living in it. I really liked it, because it wasn’t as touristy as Nara, but I found the entrance fee to the temple too expensive. So I took pictures from outside the temple and walked around for an hour or two. It was nice to see some of the Japan’s country side though. Nobody seemed stressed or in a hurry, everything looked so relaxed and there was about one bus, which goes once every half an hour for the entire city. 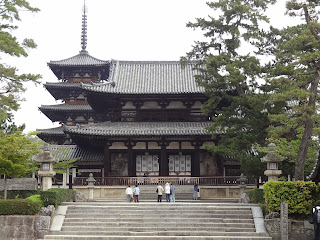 Nara was really beautiful. It’s very small, you can see it all within 3 or 4 hours. But it is definitely worth going. For the first time I tried traditional ramen and oh my god it was good. I love Japanese food. But I will write about that separately.
After my lunch I went for a walk. After seeing the fist temple I saw the deer’s walking freely. I wanted to touch one, and he seriously ate my map.  Not just a piece of it, all of it. So I didn’t know where to go. Thank god Nara has maps everywhere and is the place very touristy, so I just followed some people. I really liked Nara. It’s one small place I would advise everyone to go to. 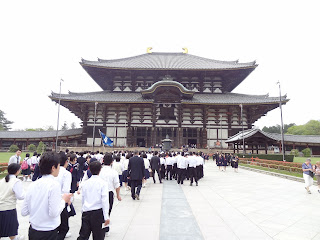 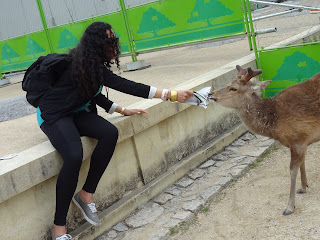 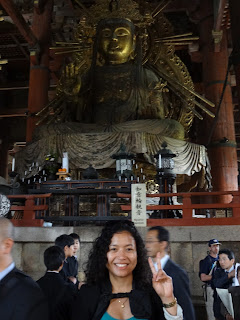 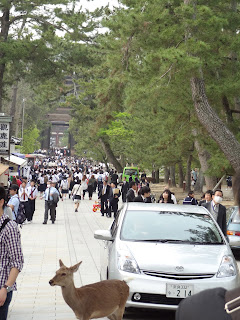 Osaka
The day after Nara I went to Osaka. I really liked Osaka. After Tokyo and Yokohama being the first and the second biggest city in Japan, Osaka is the third biggest city of Japan. Osaka has a special dish named Tako-yaki which I didn’t eat while I was in Osaka, but ate at my leaving Japan party which Ayaka threw me. Isn’t it amazing how nice Japanese people are.
Osaka has a castle in the middle of the centre. From the last floor there is a great view over Osaka. Ofcourse the castle has a garden where you can relax. Japan is all about the gardens. Japanese people invest time and money into their gardens, and they treat everything they have with love. The gardens are mostly sakura trees (Japanese Cherry Blussoms), combined with some other trees, a waterfall or floating water and a thee-house. I really love Japanese gardens.
In Kyoto I had a couch surfing experience and I must say I really didn’t like it. The guy owned an extra house and made couch surfer’s stay there. I only saw the host the first night. I was dumped in a house with two couples who were traveling. Both European, one couple was from Belgium (so I could talk dutch) and one couple from France (so I could practise my french). But neither of them was interested in hanging out with me.
I always thought couch surfing is about getting to know someone and showing him/her around (at least for a little bit). I must say I liked staying in a Hostel much more, there are more people who were traveling on their own and just the atmosphere is different. So no more couch surfing for me, but I will keep hosting people though.

The last day in Kyoto I went to the Imperial palace and the golden temple. Both were amazing! Unfortunatly I've lost my memory card with those pictures so I can't share them.


Well that was it.
xo
Posted by Unknown

Try-outs and a little bit of advice